More than 65% of the nation’s small, rural hospitals took out loans from Medicare when the pandemic hit. Many now face repayment at a time when they are under great financial strain. 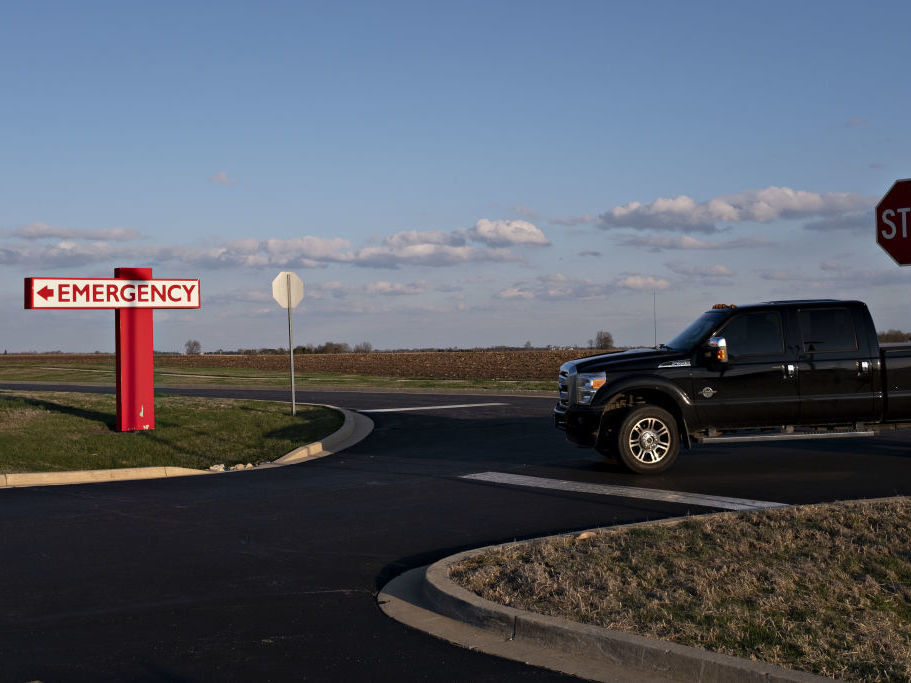 More than 65% of the nation’s small, rural hospitals took out loans from Medicare when the pandemic hit. Many now face repayment at a time when they are under great financial strain.

The money lent from the federal government is meant to help hospitals and other health care providers weather the COVID-19 pandemic. Yet some hospital administrators have called it a payday loan program that is now brutally due for repayment at a time when the institutions still need help.

Coronavirus cases have “picked up recently and it’s quite worrying,” says Usher, who is the chief financial officer for Edwards County Medical Center in Kinsley, Kan. He would like to use the federal loan money to build a negative-pressure room; such rooms are a common and effective strategy for keeping contagious patients apart from those in the rest of the hospital.

But he’s not sure it’s safe to spend that cash. Officially, the total repayment of the loan is due this month. Otherwise, according to the loan’s terms, federal regulators will stop reimbursing the hospitals for Medicare patients’ treatments until the loan is repaid in full.

When will the creditor come calling?

The federal Centers for Medicare & Medicaid Services has not yet begun trying to recoup its investment, with the coronavirus still affecting communities nationwide, but hospital leaders fear it may come calling for repayment any day now.

Hospital leaders across the country say there has been no communication from CMS on whether or when they will adjust the repayment deadline. A CMS spokesperson did not respond to our questions by press time.

“It’s great having the money,” Usher says. “But if I don’t know how much I get to keep, I don’t get to spend the money wisely and effectively on the facility.”

Usher took out the loan from Medicare’s Accelerated and Advance Payments program. The program, which existed long before the pandemic, was generally used sparingly by hospitals when they were faced with emergencies such as hurricanes or tornadoes. It was expanded for use during the coronavirus pandemic — part of billions approved in federal relief funds for health care providers this spring.

A full repayment of a hospital’s loan is technically due 120 days after it was received. If it is not paid, Medicare will stop reimbursing claims until it recoups the money it is owed — a point spelled out in the program’s rules. Medicare reimburses nearly $60 billion in payments to health care providers nationwide under Medicare’s Part A program, which makes payments to hospitals.

More than 65% of the nation’s small, rural hospitals — many of which were operating at a deficit before the pandemic — jumped at the Medicare loans when the pandemic hit because they were the first funds available, says Maggie Elehwany, former vice president of government affairs for the National Rural Health Association.

CMS halted new loan applications to the program at the end of April.

“The pandemic has simply gone on longer than anyone anticipated back in March,” says Joanna Hiatt Kim, vice president of payment policy and analysis for the American Hospital Association. The trade association sent a letter to CMS in late July asking for a delay in the recoupment.

On Monday, the House Appropriations Committee included partial relief for all hospitals in a new government funding plan. The committee’s proposal would extend the start of the repayment period for hospitals and the amount of time they are allowed to take to repay.

The continuing resolution that includes this language about relief for hospitals (among many, many other things) is still being hammered out, though it does face its own deadline: It must be approved by the House and the Senate within the next nine days or the federal government faces a shutdown.

‘Still in the middle of this crisis’

Tom Nickels, executive vice president at the AHA, says his organization appreciates the House committee’s effort to address the loans in the new bill, but full forgiveness of the loans is still needed.

Sen. Jeanne Shaheen, D-N.H., has called for changes to the loan repayment period for months and said Monday “our work is far from over.”

“We are still in the middle of this crisis — from both health and economic standpoints,” Shaheen says.

Meanwhile, hospital administrators like Peter Wright are holding their breath, waiting to see if, in order to settle the debt, Medicare will stop making payments to hospitals, even as the facilities continue to grapple with coronavirus in their communities.

“The feds, if you owe them money, they just take it,” says Wright, who oversees two small hospitals for Central Maine Healthcare in Bridgton, Maine. He says his health care system took the money because “we had no other choice; it was a cash flow issue.”

For many hospitals, Medicare payments make up 40% or more of their revenue. Not being reimbursed by Medicare would be crippling — akin to a household losing nearly half its income.

“We have no idea what we’re going to do if we have to pay it back as quickly as they say,” Wright says.

In rural Kentucky, hospital executive Sheila Currans says she “vacillated” for about a week or so, trying to decide whether to tap the loan program for her hospital — she knew it would have to be repaid and worried that could prove difficult.

“It was a desperate time,” says Currans, chief executive of Harrison Memorial Hospital in Cynthiana, Ky. In early March her hospital was the first in the state to treat a COVID-19 patient, she says.

The hospital immediately quarantined dozens of staff members at the time, and shut down elective procedures. Once COVID-19 was confirmed in the community, there was a “horrible fear” among residents of getting infected, Currans says, and that kept people from seeking outpatient care as well.

“Through March and April and most of May, I was in a complete spiral,” Currans says, and by the end of April her hospital was losing millions of dollars. To cope with the pandemic, she furloughed staff and turned one wing of the hospital into a “cough clinic” to be used exclusively by patients whose symptoms suggested they might be infected with the coronavirus.

Currans says the hospital is still seeing cases of COVID-19 show up, but other patients are beginning to return for services, too, such as at the outpatient clinics.

In terms of the hospital’s finances, “it’s still not a wonderful time,” Currans says, adding that the Medicare loan and other support from the federal government, “helped us — at least for now — survive it.”

She’s hoping the repayment demand will be pushed back to 2021 or, perhaps the loan will be forgiven.

“I know it’s a pipe dream,” Currans says. “But this has been a historic event.”

Kaiser Health News is a nonprofit, independent program of the Kaiser Family Foundation, and is not affiliated with Kaiser Permanente.

Sarah Jane Tribble spent more than a year and half reporting on a Kansas town that lost its only hospital. This month, KHN and St. Louis Public Radio will launch “Where It Hurts,” a podcast exploring the often painful cracks growing in America’s health system. You can listen to Episode One of the podcast’s first season, “No Mercy,” on Tuesday, Sept. 29.