Didiet Maulana’s “Romansa Tanimbar” (Tanimbar Romance) interweaves the stories of the Tanimbar archipelago, its culture and the women islanders who wove the fabrics with their hands.

Launched under the Svarna premium label of Didiet’s IKAT Indonesia fashion house, which focuses on preserving traditional textiles through contemporary fashion, the capsule collection captures the living beliefs of the Tanimbar people and the strength and resilience of its women.

The collection currently offers 12 looks for elegant and active women that consist of outerwear, maxi dresses, tunic tops and two-piece numbers for all occasions, both day and night.

Blending elements of Javanese lurik to match the geometrical motifs of Tanimbar ikat has revamped the traditional, handwoven textile to make it lighter and more comfortable against the skin. The fabric also has a smooth and glossy sheen, although it does not use the gold and silver threads of traditionally made ikat.

The modern appearance serves to emphasize the uniqueness of the textile, which originates in the outlying regency, formerly called West Southeast Maluku.

In their presentation, each design was accessorized with indigenous jewelry and a handwoven bag that is draped around the head in the traditional way of Maluku women. 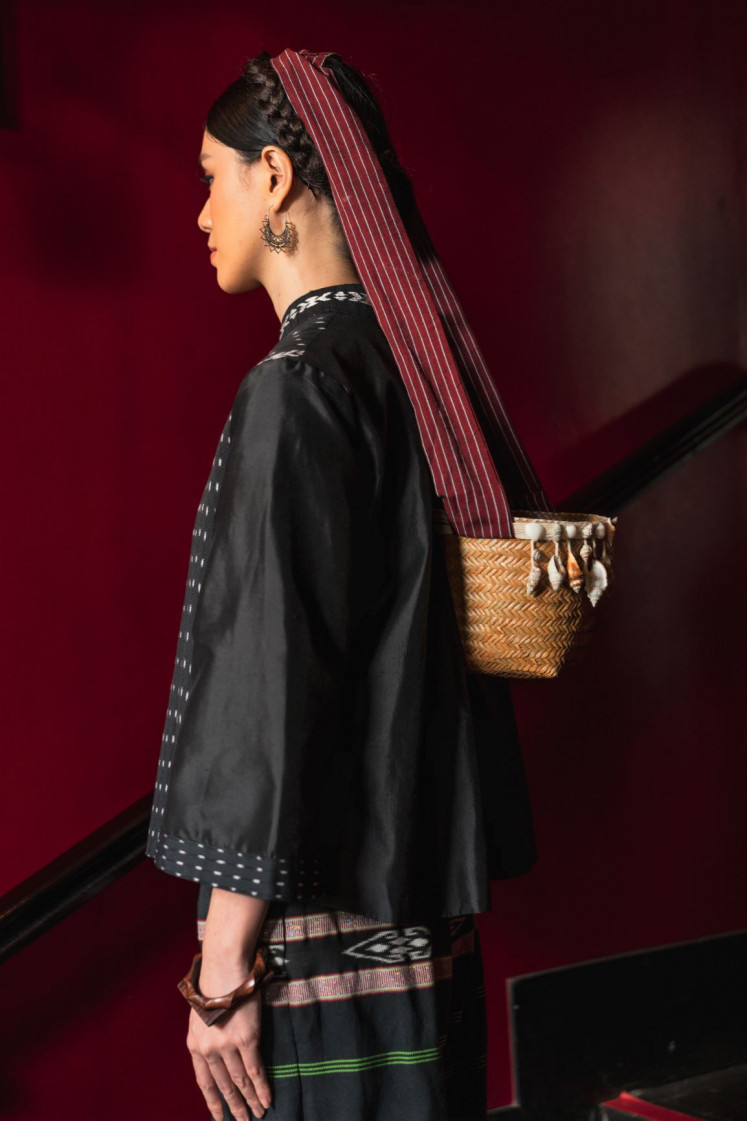 Weaving sustainability: The unique, indigenous culture of the Tanimbar people is preserved in the contemporary incarnation of couture brand IKAT Indonesia, including this woven pouch, which is traditionally draped around the head. (Courtesy of IKAT Indonesia/-)

“This collection is the outcome of my collaboration with the [small and medium enterprises; SMEs] incubation program of Bank Indonesia to support the artisans in Tanimbar,” Didiet said on Nov. 26 at a press conference and runway show streamed on Zoom.

The Romansa Tanimbar collection also featured at the central bank’s 2020 Karya Kreatif Indonesia (KKI) virtual exhibition to showcase the products of SMEs in its incubation program.

Didiet became involved in the program to offer product development workshops to the women weavers groups Batlolonar in Amdasa village and Larsasam in Olilit village, and he traveled back and forth to the islets regency over the past year to deliver the workshop.

“The workshop aimed to develop cultural products with high economic value. We only gave feedback on the materials and on more appealing colors, as the women weavers already possess the knowledge and skills to create these beautiful cloths,” said Didiet.

“Their smiles, warmth and the joy they poured into their work made me realize that this beauty is not for my eyes only. I hope this collection will be a window for people to see and find more about the Tanimbar people.”

The close relationship he developed with the weavers is evident in his use of “mama” in referring to the artisans, just as the Tanimbar people do in referring to their mothers as well as elderly women. It also led to his personal attachment to the project and hence, the new collection, which Didiet plan to expand to include menswear, as well as create bespoke designs for clients.

“We don’t usually do this, but to [sustain] the production and welfare of the mama, we will accept custom orders,” he said. 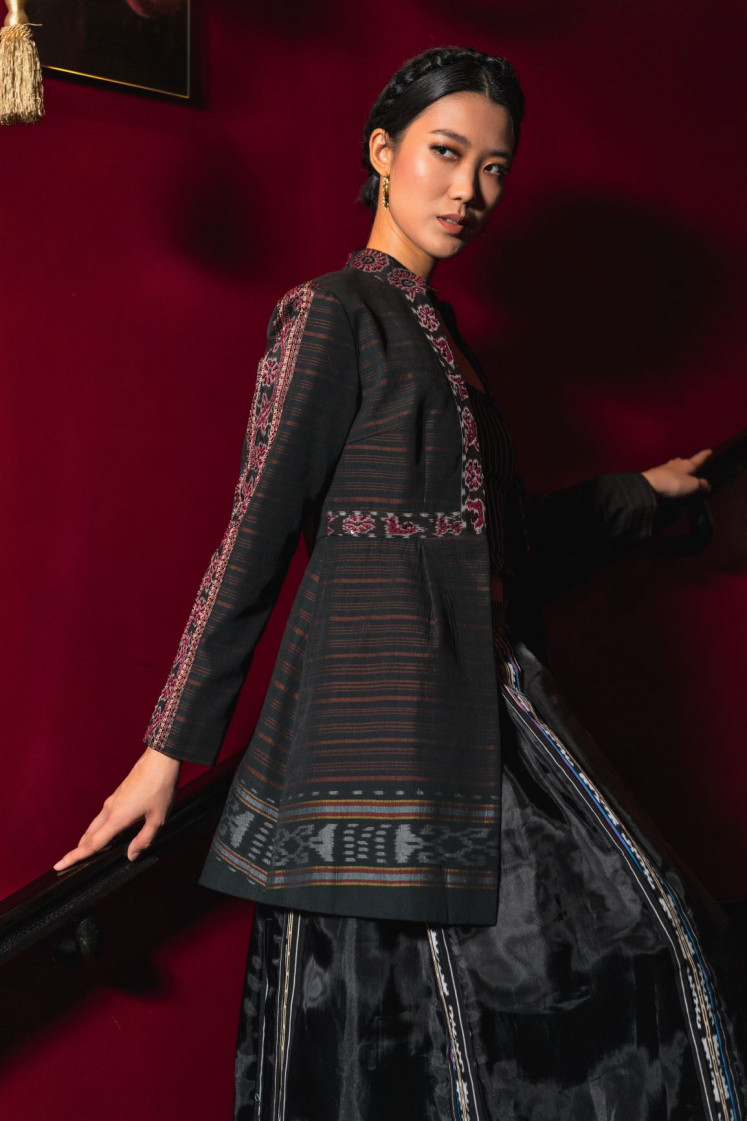 Ethnic chic: An outer in “Romansa Tanimbar” collection can also be worn as an evening outfit. (Courtesy of IKAT Indonesia/-)

Larsasam weaver Mama Liur, who attended the virtual event from her home in Tanimbar, was surprised to see the couture pieces made from the textiles she had woven.

“We’re happy to see how people appreciate our work, and it gives a boost to our spirit to continue working,” she said. “I hope more designers will come to help us sustain [our] textile production.”

Its founder, Vander Christian Soukotta, said that as Tanimbar textiles gained more visibility and interest, local authorities should also step up their efforts to sustain the cultural heritage.

“Since not many young people are interested in traditional weaving [and] the weavers are aging, it is time for the government to push for the regeneration of weavers to make sure that Tanimbar textiles will not go extinct,” he said.

To help turn the wheels of Tanimbar’s economy, IKAT Indonesia is also offering special ikat masks, each bearing traditional motifs and colors that embody resilience and hope for better days to come.

The most frequently used motifs are the wide arrowhead, which symbolizes a readiness to face life’s challenges, and the ulerati, or “marching caterpillars”, a symbol of the Tanimbar people’s respect and appreciation for nature.

“They hold metamorphosis in high regard as [a means of] how nature takes care of itself,” said IKAT Indonesia’s textile designer, Zahra Damayanti.

Meanwhile, the color scheme based on earth tones and blues symbolize the farming and fishing cultures of the Maluku people, who depend on the region’s fertile soil and marine wealth. 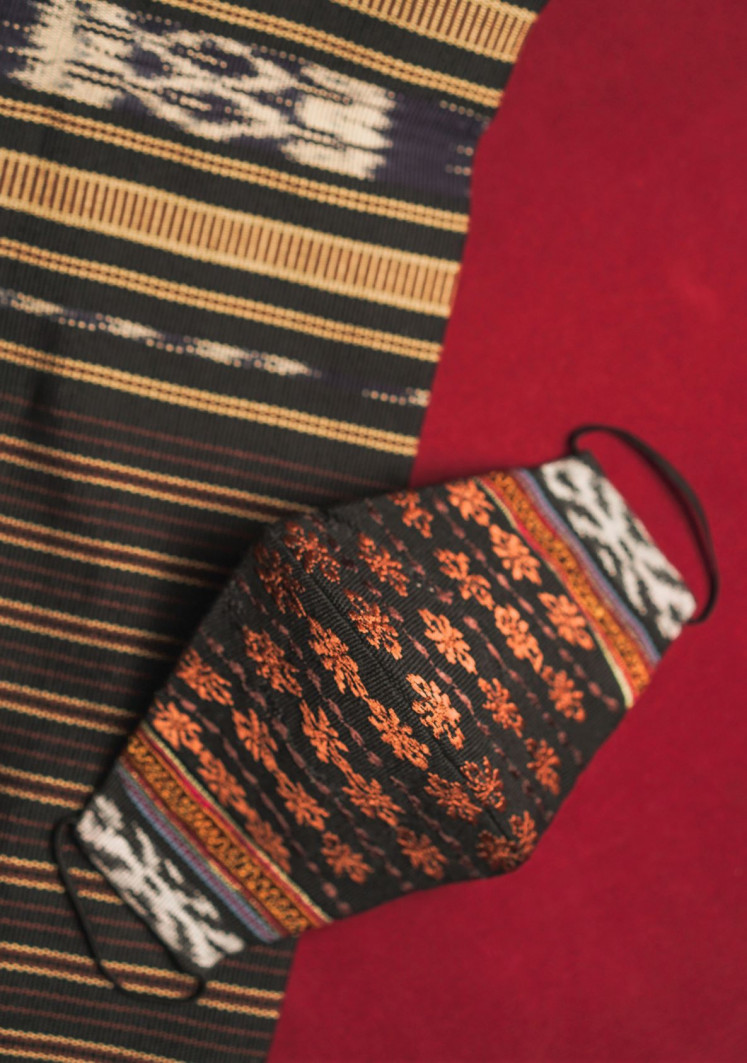 The other variant is called Latuihamallo, the surname of Glenn Fredly who died of meningitis in early April.

“He had been involved in a series of projects since last year to promote the Maluku culture,” his wife Mutia Ayu said at the press conference.

Didiet added that the singer and activist was among those who inspired him to develop a menswear line for Romansa Tanimbar.

“He had a bold fashion statement and I hope his legacy will also be preserved in Indonesian art and fashion.” (ste)

Your premium period will expire in 0 day(s)

Without the crowd’s roar, Tokyo Olympians search for spirit | World

With virus surge, US to keep travel restrictions for now | Lifestyles